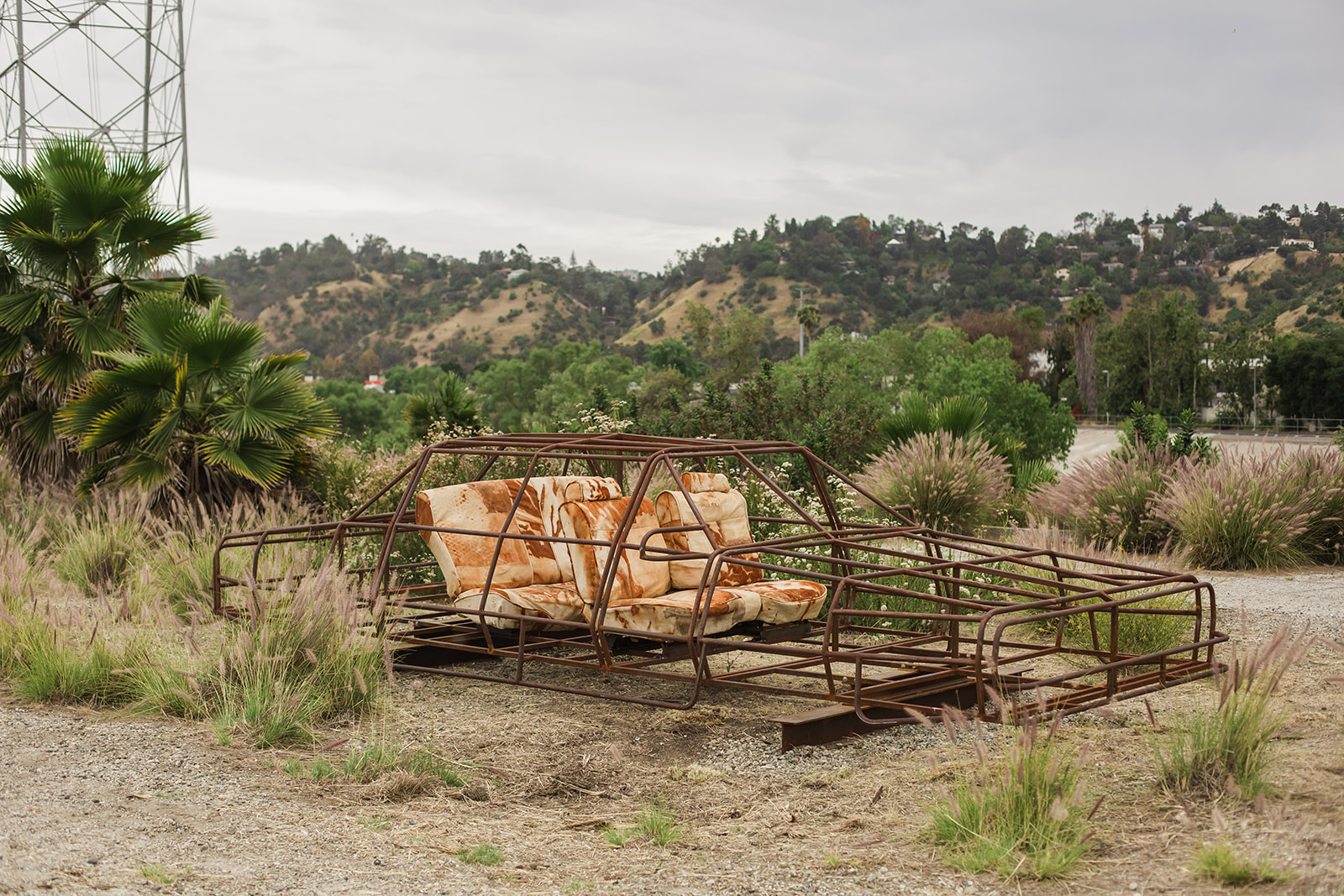 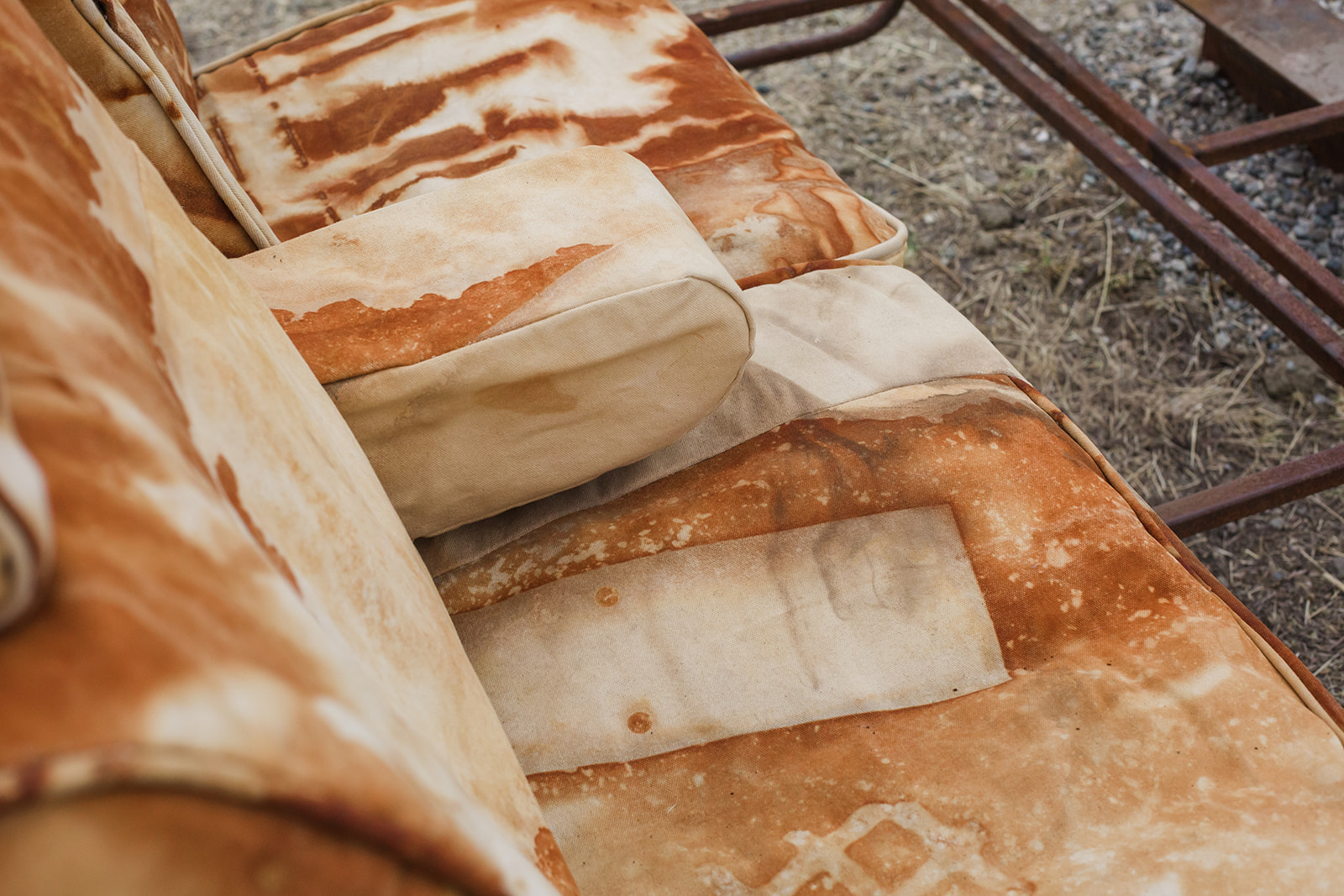 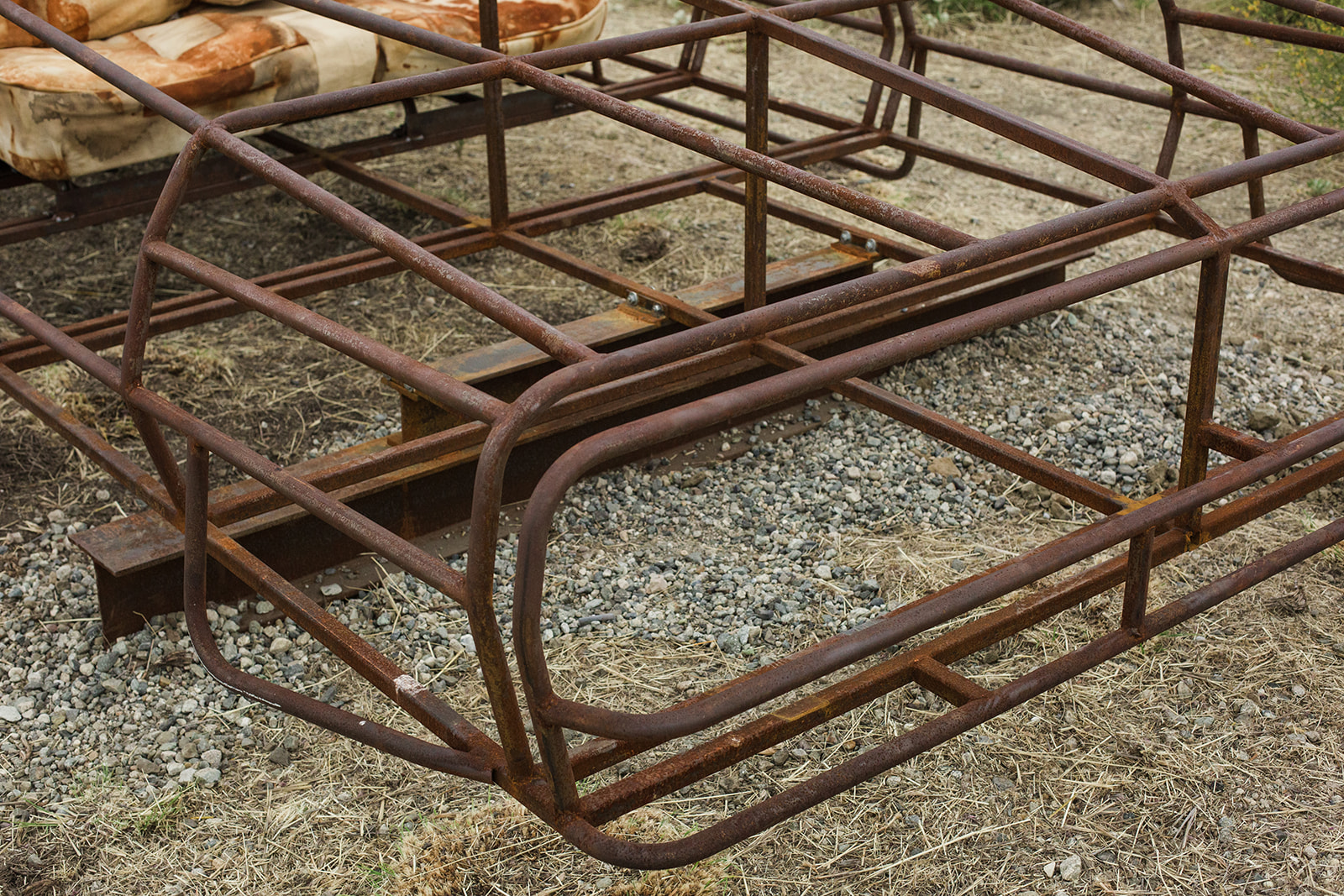 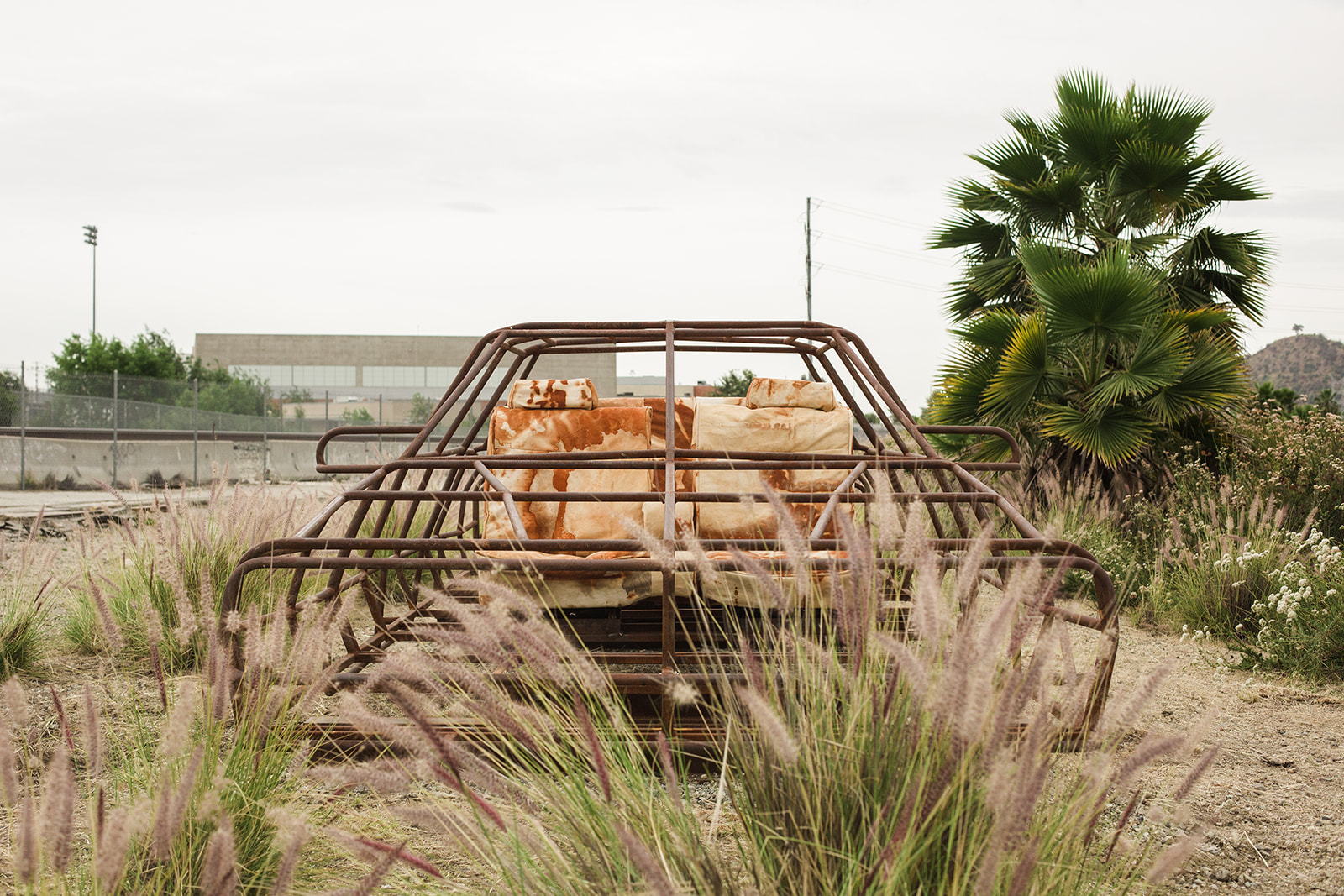 Clockshop is thrilled to present Into the ground, a collaborative sculpture by Joe Riley and Audrey Snyder. This project was originally commissioned for The Socrates Annual at Socrates Sculpture Park in New York. For the sculpture’s west coast debut, Riley and Snyder have adapted the structure to include a seat, re-upholstered with a rust-dyed cover made during participatory workshops at Socrates. During these workshops, attendees excavated iron objects from the park and participated in a communal rust-dye to produce an abstracted imprint of discarded material. This process highlights practices of use, abandonment, and alchemical transformations over time.

Into the ground reflects on how urban ecologies uptake and transform contaminants, and how collective bodies realize agency through ground-up organizing. At Socrates, this sculpture engaged with the park’s history of transformation from landfill to public park, and in Los Angeles, it will draw similar parallels to the Bowtie’s transformation-in-progress.

Joe Riley & Audrey Snyder are collaborators with one another and the artist collective Futurefarmers. Their art combines the poetic, political, and practical as a point of entry to explore dense interactions of urban and rural concourses, human and nonhuman forms. The work is context-specific and collaborative in (and with) nature. Their material-based practice attends to the connectivity of ecology and infrastructures: finding expression as sculpture, installation, and public engagements. Tangled in the knotty togetherness of geological time and political urgencies, this work proceeds with the hope of grasping the past in order to excite the present and future.

Joe Riley is an artist, researcher, fabricator, and educator. He has participated in the Whitney Independent Study Program (2016-17), Art & Law Program (2018), Interdisciplinary Art & Theory Program (2018-19), and was a student organizer with Free Cooper Union. He has a BFA from Cooper Union (2013) and is a PhD student in Art Theory, Criticism, and Practice at UC San Diego. He has taught at the Cooper Union School of Art and Stevens Institute of Technology. Alongside Audrey Snyder he was a fellow of the Socrates Sculpture Park Emerging Artist Fellowship (2018-19) and Fresh Kills Field R/D program (2017-18). His collaborative work with the collective Futurefarmers has exhibited widely, including Artes Mundi 7 and Sharjah Biennial 13.

Audrey Snyder is an artist and chef based in Brooklyn, NY. She has toured the United States by bicycle, sailed aboard Futurefarmer’s Seed Journey, and was a chef with Doug Aitken’s Station to Station project. Audrey received a BFA from the Cooper Union School of Art (2013). She is a collaborator with the collective Futurefarmers and alongside Joe Riley she is a current participant in the Fresh Kills Field R/D program (2017-18), a fellow of the Socrates Sculpture Park Emerging Artist Fellowship (2018-19), and participant in the Interdisciplinary Art & Theory Program (2018-19). 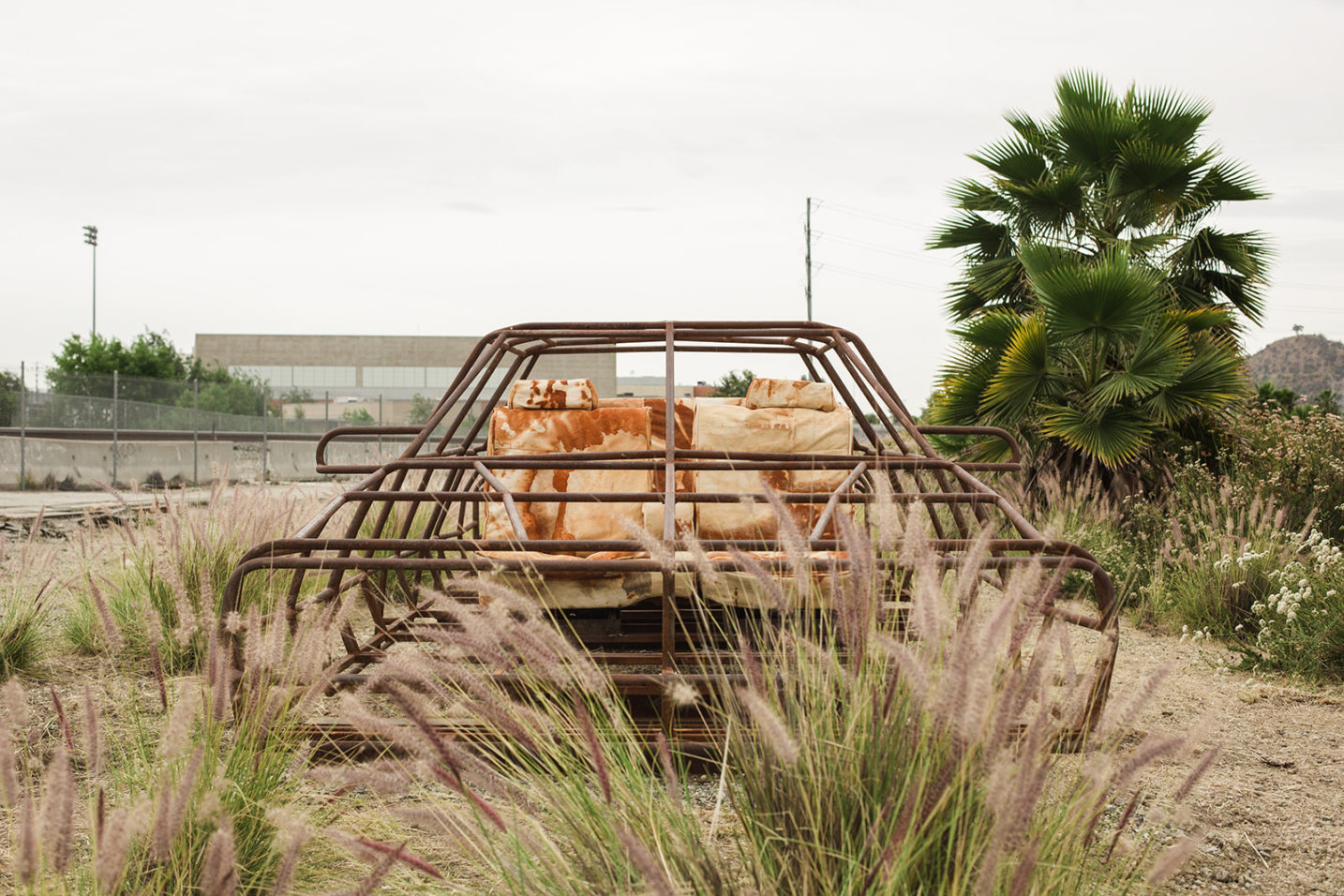