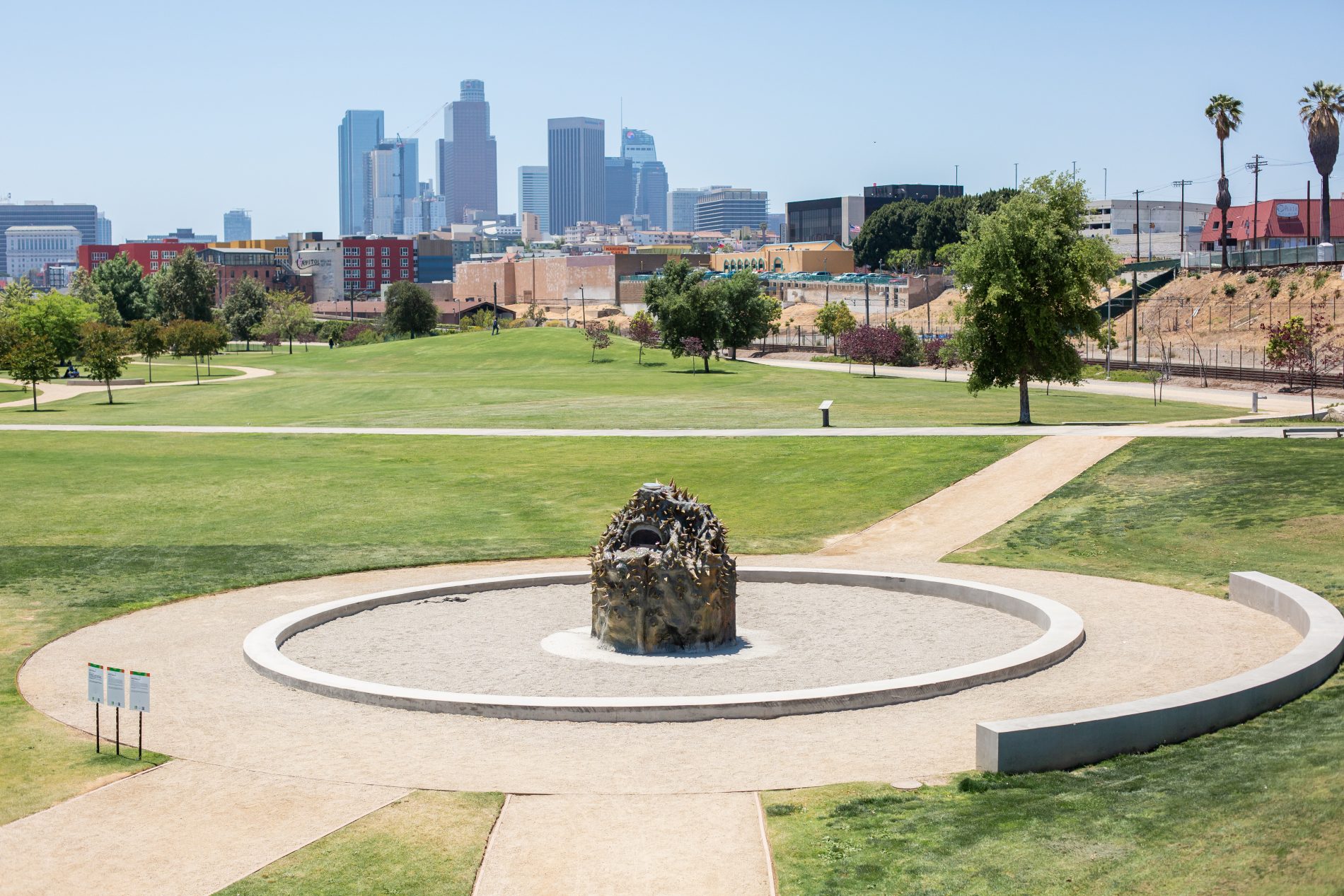 Aparicio’s practice is centered on explorations of materiality, and how they relate to complex histories. In this piece, his use of brick aims to recontextualize the settler colonist history of the Zanja Madre, from a tool to steal water and enact violence on Indigenous peoples, to a source of food and connection. The ceramic spikes that cover the sculpture reference the Ceiba tree, a symbol of protection and spirituality to Central American immigrants.

Beehive ovens are one of the oldest traditions in Central America and often serve as the main cooking source and a hub for community connections in rural areas of El Salvador. The inner layer of the oven is made of bricks, echoing the construction of the Zanja Madre, the original aqueduct that brought water to the nascent Pueblo De Los Angeles. The sculpture is also covered with a coat of fired and glazed ceramic thorns similar to those found on the trunk of young Ceiba trees, the most sacred tree of the ancient Maya, and which are native to Central, South America, and West Africa.

In this work, the artist centers his own family’s history, the strength of collective organization, and a material investigation that draws from the deepest well of indigenous technology to shift the object away from the modernist conception of the supremacy of form as a universal given. The sculpture will be activated through collaborations with local partners for baking community events over the run of the project’s installation at the Los Angeles State Historic Park. The artist’s aim is to activate public space when so much is in flux and people are in desperate need of connection and healing.

Pansa del Publico is also part of a programmatic collaboration with Occidental College’s Oxy Arts initiative bringing together community, artists and cultural projects through socially conscious dialogue and engagement. During weekends in June and July a number of public activations will take place amplifying the work’s focus on collective action by inviting community members to share stories, food, and experiences together.

This project is part of WE RISE, a month-long initiative that encourages wellbeing and healing through art, connection and community engagement. More at werise.la.

Eddie Aparicio was born in Los Angeles. He received an MFA in Painting and Printmaking from Yale University, a BA from Bard College and also attended the Skowhegan School of Painting and Sculpture and the Southern California Institute of Architecture. His recent works address the intersection of social and environmental justice through specific use of material, sound, and multiplicity of site. He uses materials such as rubber and amber that have a strong tie to pre-hispanic cultures in Central America to document Central American communities in Los Angeles. He has recently exhibited at El Museo, the Crystal Bridges Museum of American Art, Commonwealth and Council, The Mistake Room, and Los Angeles Contemporary Exhibitions among others. He has received awards from the National Endowment for the Arts, California Community Foundation, and the Robert Rauschenberg Foundation.

Clockshop has shifted our public programs and artwork commissions from the Bowtie site along the LA River to the Los Angeles State Historic Park as part of our strategic response to state and local health ordinances for how public gatherings can take place during the COVID-19 pandemic.