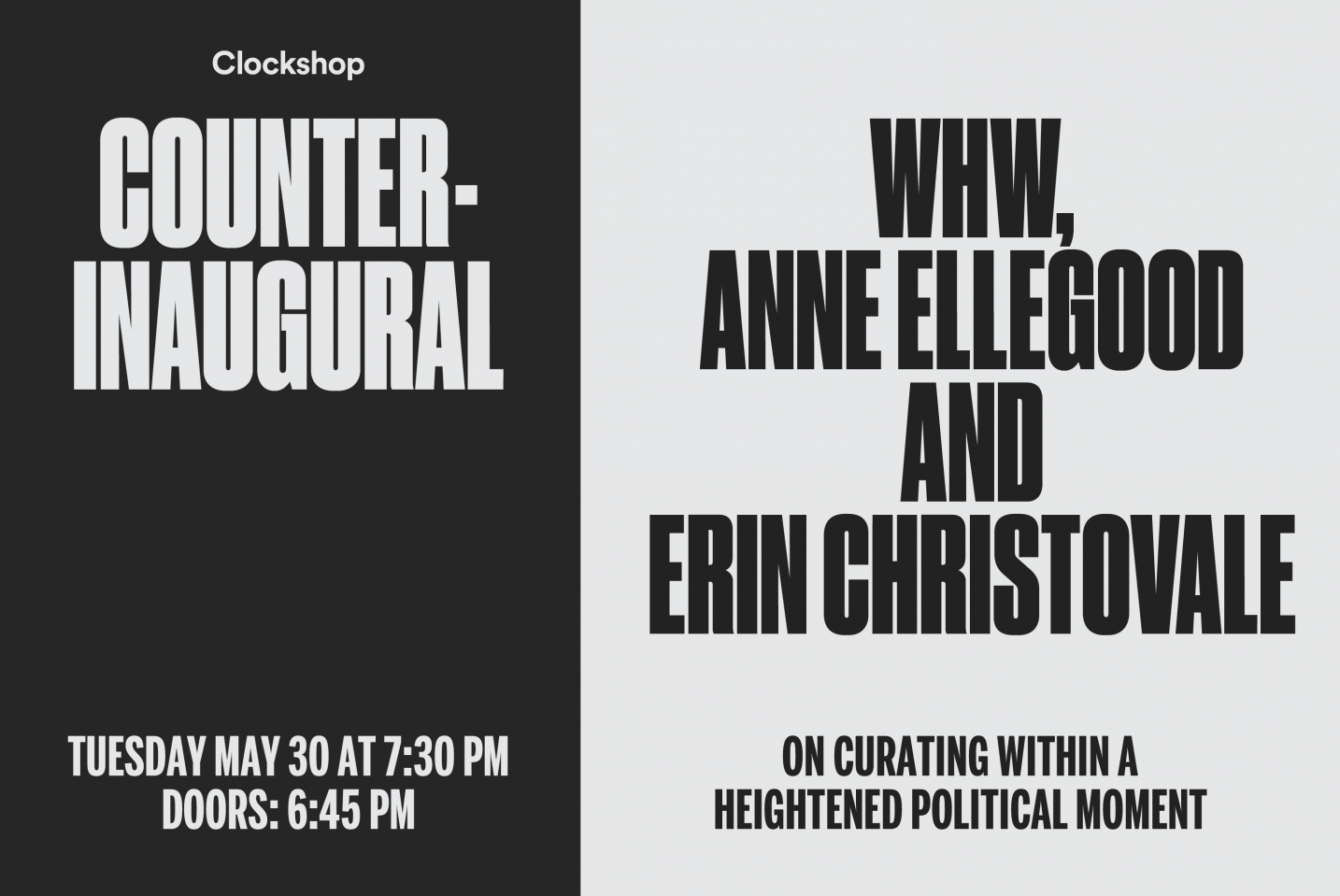 Since the 2016 election, artists, curators and arts organizations alike have responded to this presidency with work that seeks to understand (and possibly upend) our current political systems.

What are the stakes of such engagement? What role can art play within politics?

Anne Ellegood and Erin Christovale, curators of Made in L.A. 2018, and What, How & for Whom, curators of the 2009 Istanbul Biennial, will join us to discuss Curating Within a Heightened Political Moment.

This event is part of Clockshop’s Counter-Inaugural, a series of talks addressing local and national politics through a cultural lens.

What, How, & for Whom/WHW is a group of four curators from Croatia who have been collaborating since 1999. Its members, based in Zagreb and Berlin, are Ivet Ćurlin, Ana Dević, Nataša Ilić, and Sabina Sabolović. WHW organizes a range of production, exhibition, and publishing projects. The group is particularly interested in creative use of public space. Since 2003, WHW has programmed Gallery Nova, a city-owned gallery in Zagreb that hosts exhibitions of international and local artists, as well as lectures and public discussions. Described in the New York Times as “deeply influential,” WHW has worked in many international contexts, including the Museo Nacional Centro de Arte Reina Sofía; Istanbul Biennial; Creative Capital in New York City; and Kunsthalle Fridericianum in Kassel.

Anne Ellegood is the Senior Curator at the Hammer Museum. In addition to organizing exhibitions and building the collection, she oversees the Hammer Projects series and the Public Engagement program. Prior to joining the Hammer in 2009, she was Curator of Contemporary Art at the Hirshhorn Museum & Sculpture Garden in Washington D.C. and Associate Curator at the New Museum of Contemporary Art. She recently organized the first North American retrospective of the work of Jimmie Durham, which opened at the Hammer in January 2017, and is traveling to the Walker Art Center, the Whitney Museum of American Art, and the Remai Modern in Saskatoon. Recent group exhibitions include Take It or Leave It: Institution, Image, Ideology (2014); Made in L.A. 2012, the Hammer’s inaugural biennial of LA-based artists; and All of this and nothing (2011). Since joining the Hammer, she has organized numerous solo exhibitions, including those with Kevin Beasley, Latifah Echakhch, Shannon Ebner, Charles Gaines, My Barbarian, Kelly Nipper, John Outterbridge, Pedro Reyes, Francis Upritchard, Sara VanDerBeek, and Lily van der Stokker.  Ellegood is currently co-organizing, with Erin Christovale, the Hammer’s next biennial of Los Angeles-based artists for summer 2018.

Erin Christovale is an independent curator and film programmer based in Los Angeles. She is the curator of Black Radical Imagination with Amir George, which has screened both nationally and internationally in spaces such as MoMA PS1, MOCA Los Angeles, and the Museo Taller José Clemente Orozco. Exhibitions include a/wake in the water: Meditations on Disaster (2014) at the Museum of Contemporary African Diasporan Arts, Memoirs of A Watermelon Woman (2016) and A Subtle Likeness (2016) at the ONE National Gay and Lesbian Archives, and S/Election: Democracy, Citizenship, Freedom (2016) at the Los Angeles Municipal Art Gallery.  Her curatorial projects have been mentioned in ARTFORUM, Hyperallergic, African Arts Journal and Artsy. She is currently organizing the 28th anniversary of ALTERNATE ENDINGS, RADICAL BEGINNINGS with Vivian Crockett as part of Visual AIDS’ longstanding project, A Day With(Out) Art and Made in L.A. 2018 with Anne Ellegood at the Hammer Museum.

This event is made possible with support from the Trust for Mutual Understanding, NEA Art Works and the Republic of Croatia Ministry of Culture, with additional support from the Pasadena Art Alliance and Karen Hillenburg.