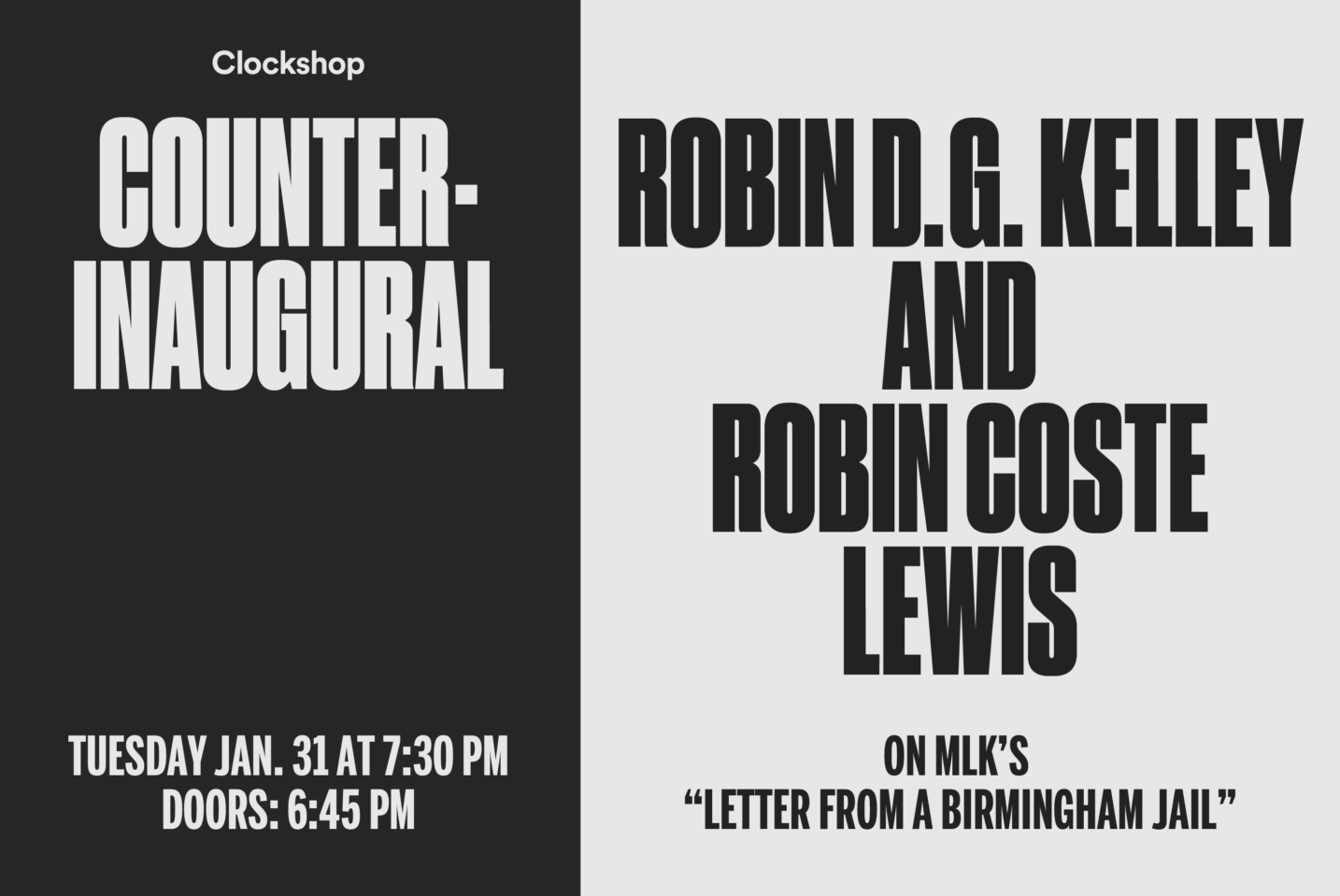 This letter was written in response to a public statement of concern issued by eight white religious leaders of the American South about the civil rights movement’s tactics of nonviolent direct action. Kelley and Lewis will reflect on this historic document, and discuss what we can learn now from the resistance strategies King championed.

This event is part of Clockshop’s Counter-Inaugural, a series of talks addressing the misogyny, hate speech, and climate change denial that dominated the 2016 presidential campaign.

Robin D.G. Kelley is Professor and Gary B. Nash Endowed Chair in U.S. History in the Department of History at the University of California, Los Angeles. His research has explored the history of social movements in the U.S., the African Diaspora, and Africa; black intellectuals; poverty studies and ethnography; colonialism/imperialism; organized labor; and constructions of race. Kelley’s essays have appeared in the Journal of American History, African Studies Review, New York Times Magazine, Utne Reader, New Labor Forum, and Counterpunch. Kelly has written several books, including: Freedom Dreams: The Black Radical Imagination, and Thelonious Monk: The Life and Times of an American Original. His most recent book, Africa Speaks, America Answers!: Modern Jazz in Revolutionary Times, examines the lives of four artists and the groups they led during the age of African decolonization.

Robin Coste Lewis is a Provost’s Fellow in Poetry and Visual Studies at the University of Southern California. In 2015 she published her poetry debut, Voyage of the Sable Venus. Critics called this first collection, “stunning…a masterpiece…surpassing imagination, maturity, and aesthetic dazzle…a book that is formally polished, emotionally raw, and wholly exquisite.” Voyage of the Sable Venus was awarded the 2015 National Book Award for Poetry—the first poetry debut to do so since 1974. Lewis is a Cave Canem fellow and a fellow of the Los Angeles Institute for the Humanities. She received her MFA in poetry from NYU, and an MTS in Sanskrit and comparative religious literature from the Divinity School at Harvard University. A finalist for the Rita Dove Poetry Award, the Los Angeles Times Book Prize, the Hurston/Wright Poetry Award, and the California Book Award, Lewis has published her work in various journals and anthologies, including The Massachusetts Review, Callaloo, The Harvard Gay & Lesbian Review, Transition, VIDA, Phantom Limb, and Lambda Literary Review, among others. She has taught at Wheaton College, Hunter College, Hampshire College, the University of Southern California, and the NYU Low-Residency MFA in Paris. Lewis was born in Compton, California; her family is from New Orleans.