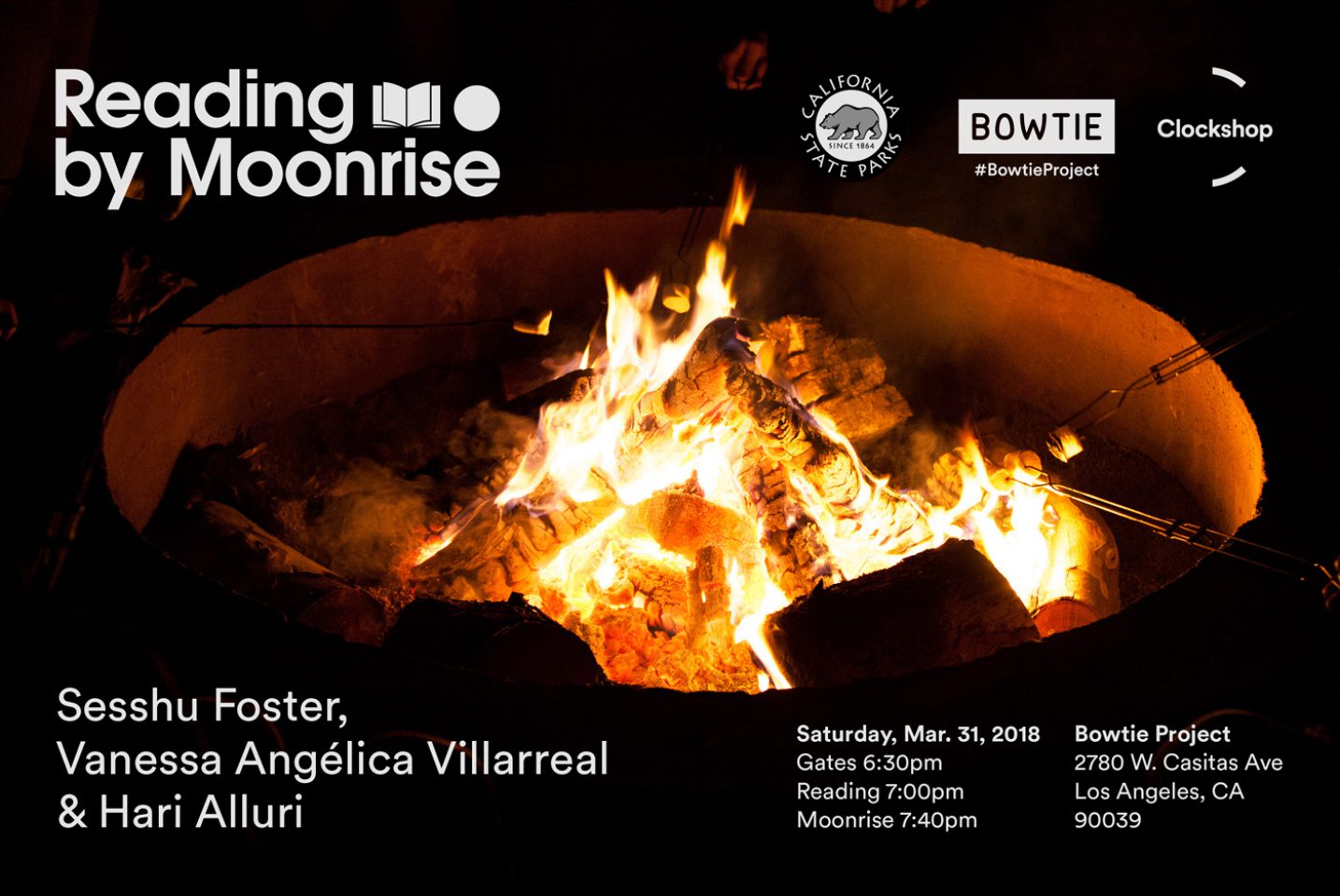 Join us at the Bowtie Project for an evening around the fire as poets Sesshu Foster, Vanessa Angélica Villarreal and Hari Alluri read new and favorite works while the full moon rises over the LA river. This special Reading by Moonrise is organized in partnership with Kaya Press.

Guests are encouraged to bring picnic items and blankets. S’mores will be provided between readings.

Poet, teacher, and community activist Sesshu Foster grew up in East Los Angeles. He earned his MFA from the Iowa Writers’ Workshop and returned to LA to continue teaching, writing, and community organizing. His first collection of poetry, City Terrace Field Manual (1996), celebrates the neighborhood Foster grew up in. He has said that representing his community as one of his central tasks. He is the author of American Loneliness: Selected Poems (2006). His third collection of poetry, World Ball Notebook (2009), won an American Book Award and an Asian American Literary Award for Poetry. Foster is the author of the novel of speculative fiction Atomik Aztex (2005), which won the Believer Book Award and imagines an America free of European colonizers. Kaya Press published his most recent poetry collection, City of the Future, this year.

Vanessa Angélica Villarreal was born in the Rio Grande Valley borderlands to formerly undocumented Mexican immigrants. Her work has recently appeared in Academy of American Poets Poem-a-Day, Buzzfeed, Epiphany, Southern Indiana Review, Apogee, Poor Claudia, PBS Newshour and elsewhere. She is the author of the collection Beast Meridian (Noemi Press, Akrilica Series, 2017) and is currently pursuing her doctorate in English Literature and Creative Writing at the University of Southern California in Los Angeles while raising her son with the help of a loyal dog.

Hari Alluri, who immigrated to Vancouver, Coast Salish territories at age twelve, is the author of Carving Ashes (CiCAC, 2013), The Promise of Rust (Mouthfeel, 2016) and The Flayed City (Kaya Press, 2017). An award-winning poet, educator, and teaching artist, his work appears widely in anthologies, journals and online venues, including Chautauqua, Poemeleon and Split This Rock. He is a founding editor at Locked Horn Press, where he has co-edited two anthologies, Gendered & Written: Forums on Poetics andRead America(s): An Anthology. He holds an MFA in Creative Writing from San Diego State University and, along with the Federico Moramarco Poetry International Teaching Prize, he has received VONA/Voices and Las Dos Brujas fellowships and a National Film Board of Canada grant. Hari currently serves as editor of pacific Review in San Diego, Kumeyaay land.

Kaya Press is a group of dedicated writers, artists, readers, and lovers of books working together to publish the most challenging, thoughtful, and provocative literature being produced throughout the Asian and Pacific Island diasporas. We believe that people’s lives can be changed by literature that pushes us past expectations and out of our comfort zone. We believe in the contagious potential of creativity combined with the means of production.

This event was made possible with support from the Department of Cultural Affairs.