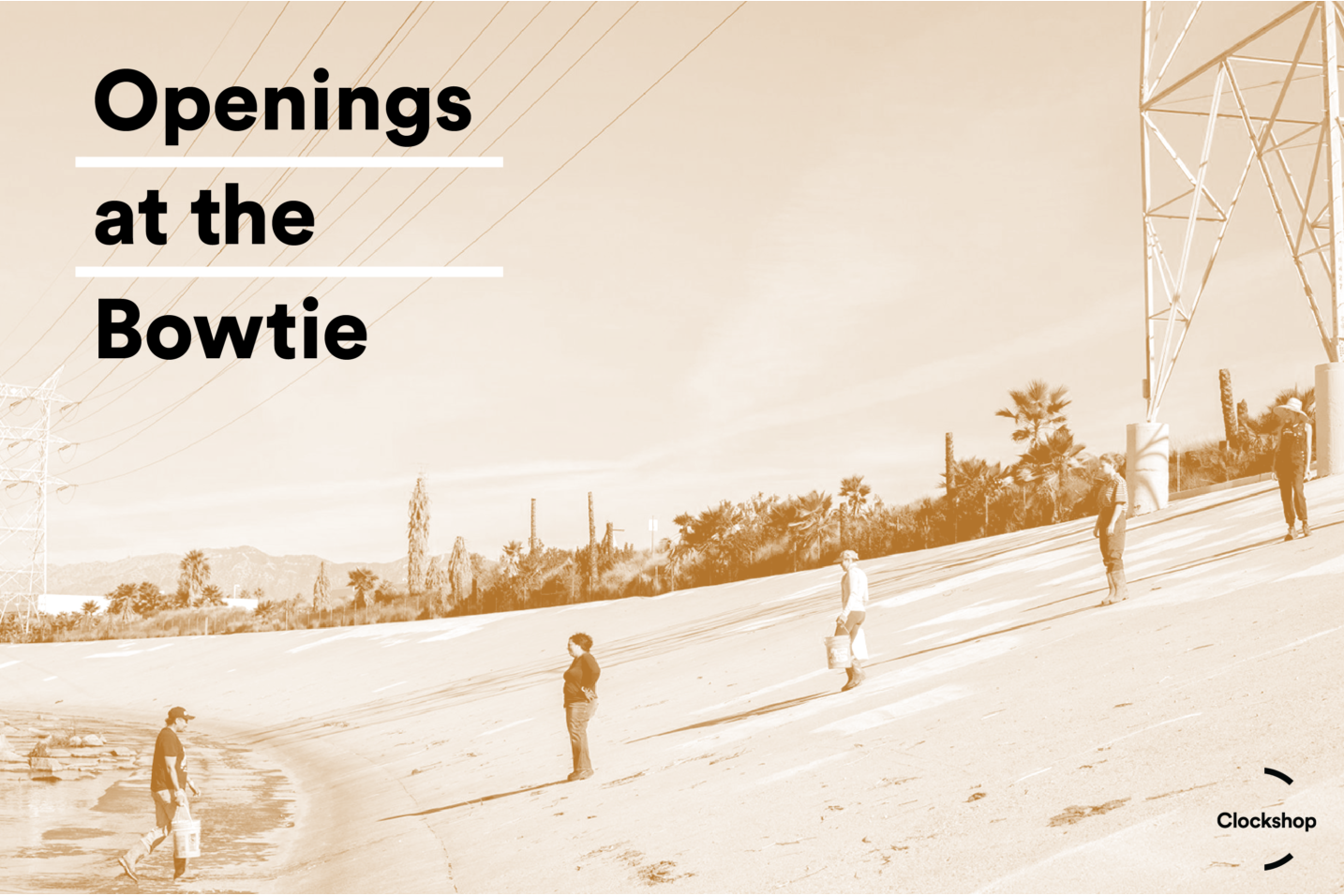 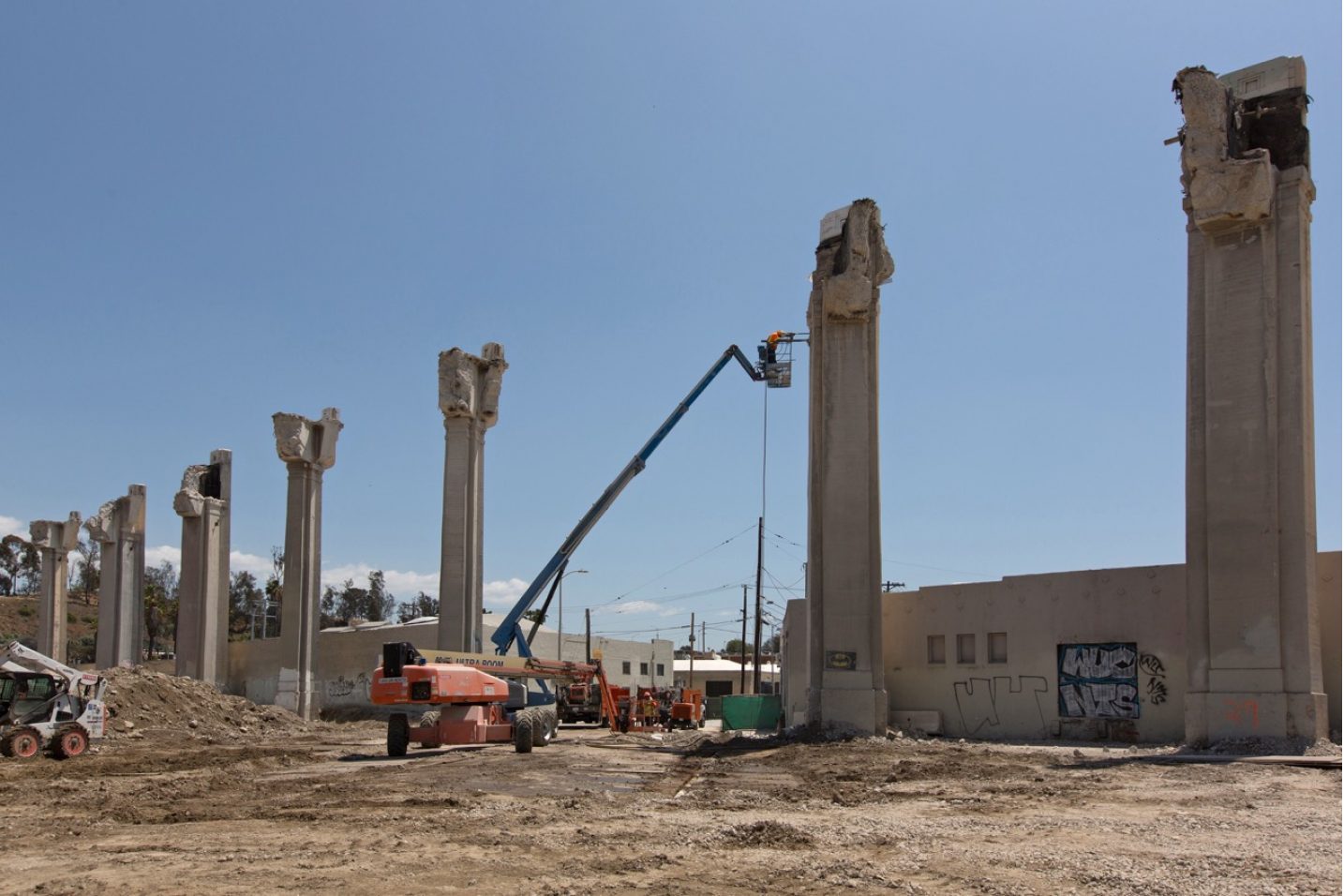 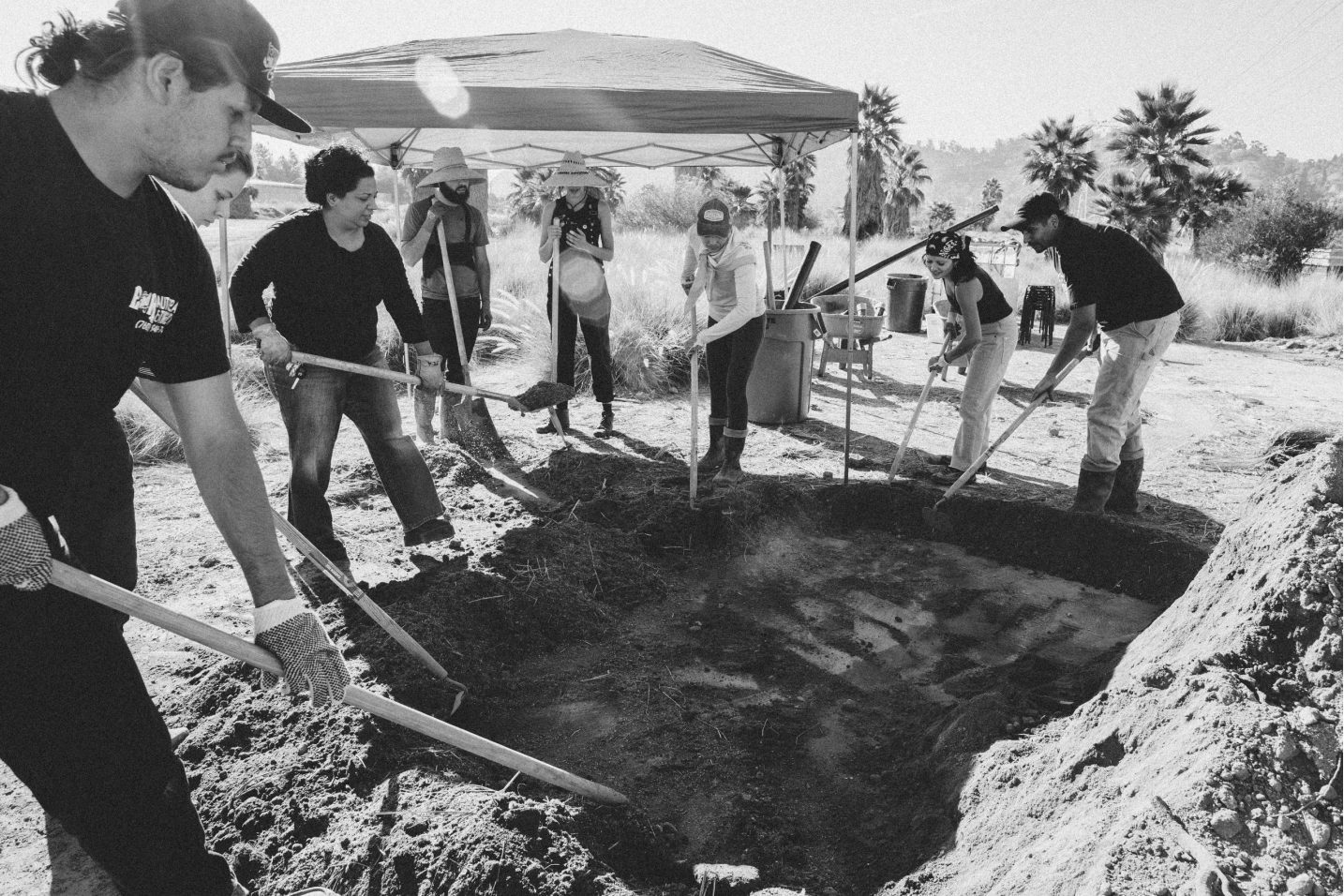 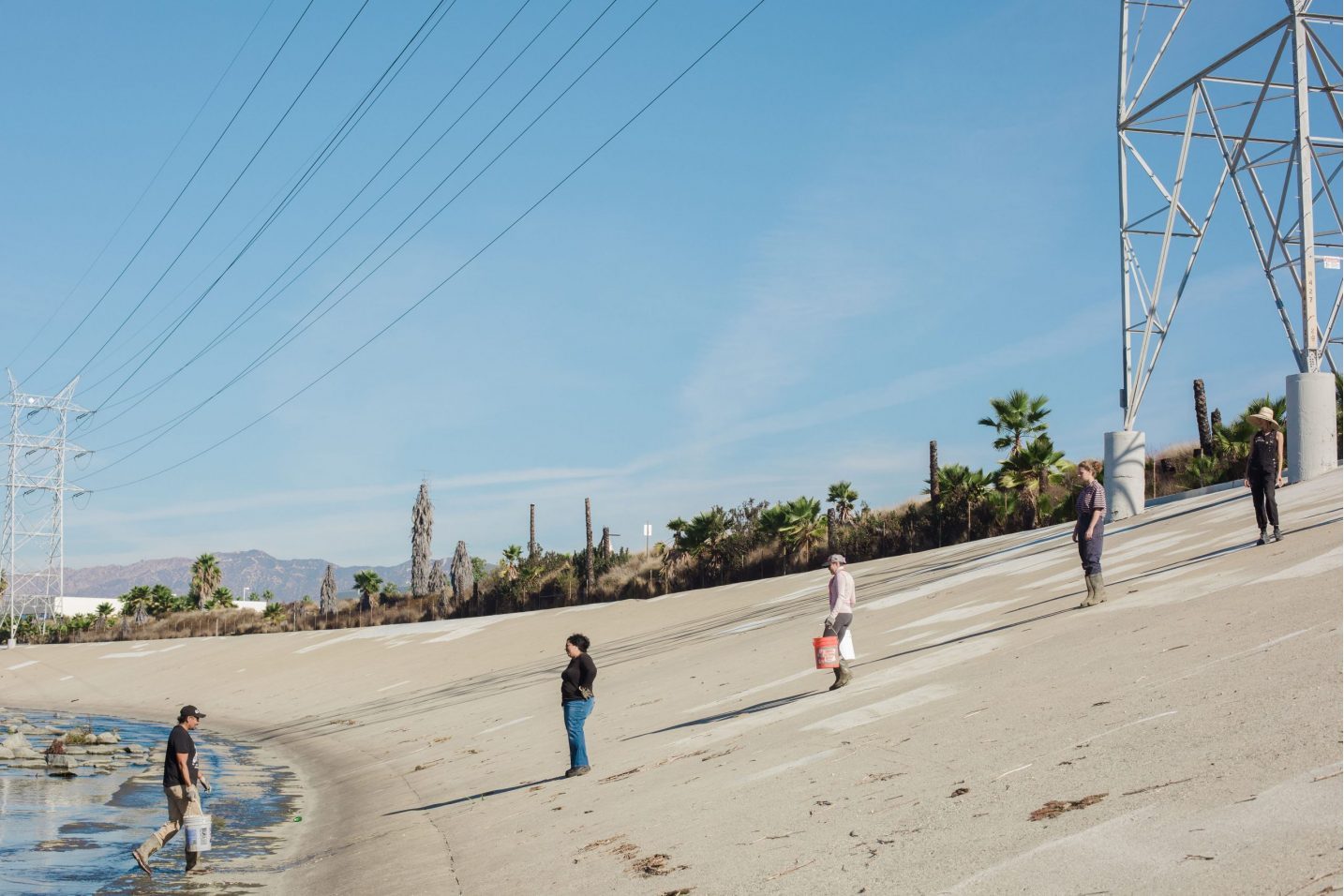 Join Clockshop for the opening of Puente, a project initiated by artist Rafa Esparza in collaboration with Mario Ayala, Karla Canseco, and Beatriz Cortez, with support from Mar Citlali, Noé Olivas, and several community volunteers.

Making reference to the ruins of Los Angeles’s historic 6th Street bridge, Puente invites viewers to reflect on their surroundings, infrastructural isolation, and potential connections. Built in collaboration with local community members, Puente bridges their experiences of the Bowtie with its unknown future.

Puente responds conceptually and aesthetically to a found concrete pillar at the Bowtie, building a path out from that point towards the river. Each newly built adobe pillar features viewing tunnels that frame particular vignettes in the surrounding landscape, shaping the way we see the site.

Rafa Esparza is a multidisciplinary artist who was born, raised, and is currently living in Los Angeles. Woven into Esparza’s bodies of work are his interests in history, personal narrative, and kinship. His work is often inspired by his own relationship to colonization and the disrupted genealogies that result from it. Using live performance as his main mode of inquiry, Esparza employs site-specificity, materiality, memory and (non)documentation as primary tools to interrogate and critique ideologies, power structures and binaries that problematize the “survival” process of historically significant narratives and social spaces. Recently, Esparza has initiated experimental collaborative projects that are grounded in laboring with land, specifically, adobe — a labor and skillset inherited from his father, Ramon Esparza. In these projects, the artist shares institutional space and resources with invited Brown and Queer artists and cultural producers. Esparza is invested in working in the local geographies of his hometown and those of the Southwest, including Mexico and Latin-America.

Beatriz Cortez is a Los Angeles-based artist and scholar. She was born in El Salvador and has lived in the United States since 1989. Her work explores simultaneity, life in different temporalities and different versions of modernity, particularly in relation to memory and loss in the aftermath of war and the experience of migration, and in relation to imagining possible futures. She has exhibited her work nationally in Los Angeles, San Francisco, Texas, Washington, D.C., New York, Minneapolis, and Miami, and internationally in El Salvador, Costa Rica, Guatemala, Ecuador, and China. She has received the 2018 Rema Hort Mann Foundation Fellowship for Emerging Artists, the 2017 Artist Community Engagement Grant, and the 2016 California Community Foundation Fellowship for Visual Artists. She holds an M.F.A. from the California Institute of the Arts, and Ph.D. in Latin American literature from Arizona State University. She teaches in the Department of Central American Studies at California State University, Northridge. Her show Trinidad: Joy Station will be on view at the Craft and Folk Art Museum from January 27-May 12, 2019.

Karla Ekatherine Canseco is an interdisciplinary artist based in Los Angeles. Her practice explores the nuances of identity through different mediums. Karla is interested in the potential that exists within fractures that are often overlooked. She reinterprets her own history and translates it through sculpture and performance.

Mario Ayala is a painter. He often works with airbrushing to subvert hierarchical histories of painting, and to highlight sub-cultures relevant to his lived experience. Ayala graduated from the San Francisco Art Institute in 2014 where he received the Yale Norfolk Fellowship in 2012. In 2014, he was a participant at the Skowhegan School of Painting & Sculpture. Ayala’s solo exhibitions include AUT Of Body at Loyal in Stockholm (2018), Pen Pal at Evergold Projects in San Francisco (2017), and Seasoned And Embarrassed Like A Wet Dog at SADE in Los Angeles (2017). Recent group exhibitions include EBO Club at STL LA in Los Angeles (2018), Fantasies And Fallacies at the Consulado General de Mexico in Los Angeles (2018), Fire Season at Mauve in Vienna (2017), and a two-person exhibition with Greg Ito called Sun Sprawl at Club Pro in Los Angeles (2018). Mario lives and works in Los Angeles. His upcoming exhibition Give A Dog A Bad Name And Hang Him opens May 4, 2019 at Evergold Projects in San Francisco, CA.