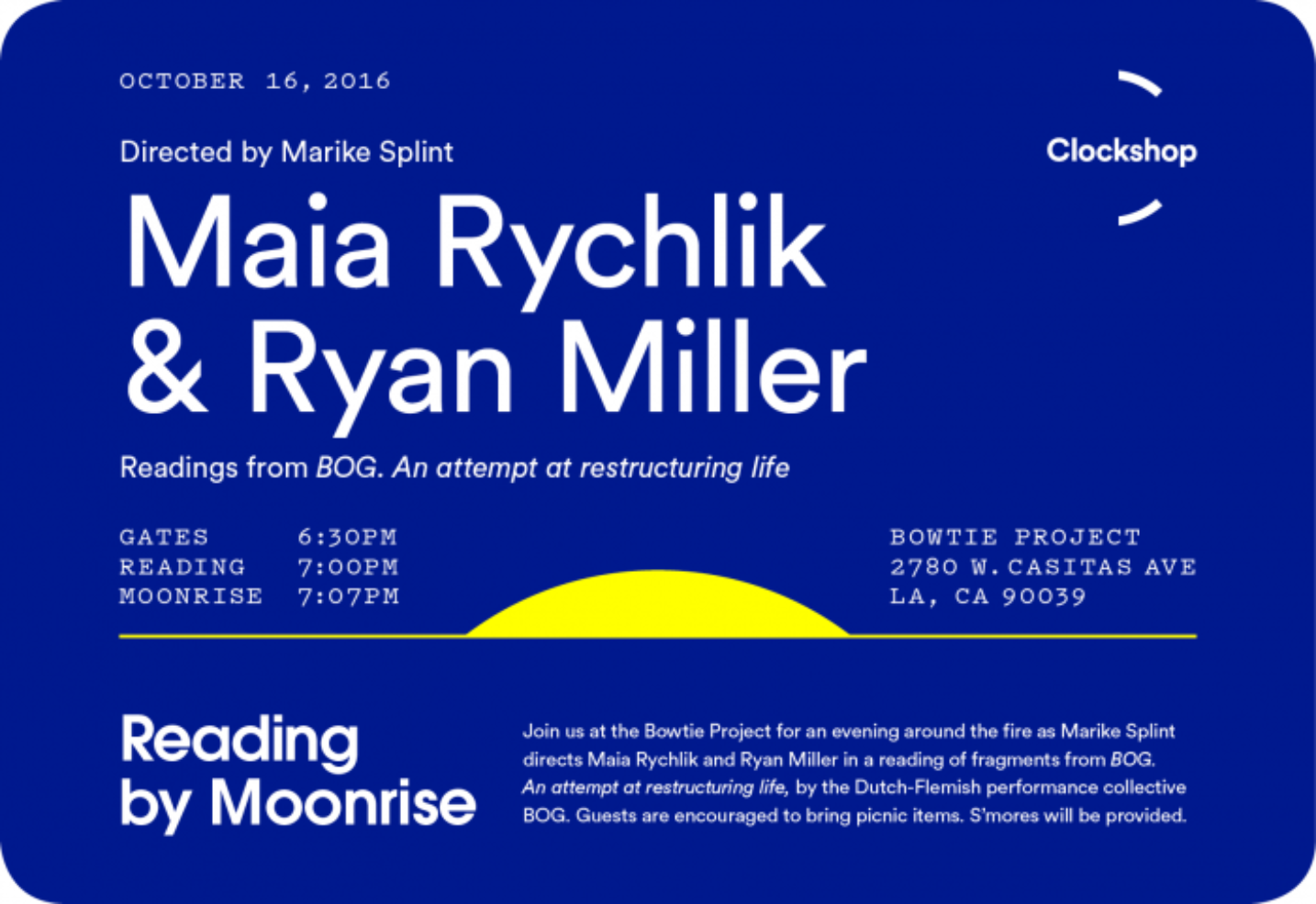 Join us at the Bowtie Project for an evening around the fire as Marike Splint directs Maia Rychlik and Ryan Miller in a reading of fragments from BOG. An attempt at restructuring life, by the Dutch-Flemish performance collective BOG.

Guests are encouraged to bring picnic items. S’mores will be provided after the performance.

Reading By Moonrise is a fireside reading series held at the Bowtie Project on the eve of the full moon.

About the Text
BOG. An attempt at restructuring life

BOG. comes from the Dutch word boog, which can be translated as arc.
BOG. refers to creating a cycle, an overall picture of all of human life.
BOG. tries to restructure life in its on way, using only verbs.
We zoom out to the complex diversity of existence, until the bigger picture becomes clear. Sighing in gratification at the idea of an overview.
Like when, in a plane taking off, suddenly you recognize the structure of the chaotic city.

BOG. was founded in 2013 and named after their first performance: BOG. An attempt at restructering life. The work of BOG. is driven by the longing for an overview, for naming, folding out, zooming out, rearranging, categorizing and summarizing of all the things that we humans try to capture but are too big to grasp.

Director
Marike Splint is a Dutch director specializing in site-responsive and immersive theater. She has created shows in sites ranging from a bus driving through a transitional neighborhood to wide open meadows, taxicabs, train stations and hotel rooms. Her work has been presented in The Netherlands, Casablanca (Morocco), Tbilisi (Georgia), and at the Ruhrtriennial in Germany. AMONG US will be her Los Angeles premiere. Splint received her BA in philosophy from the University of Amsterdam and her MFA in directing from Columbia University. She is the recipient of a Fulbright Scholarship and a Columbia University Merit Fellowship, and currently is a faculty member in the Theater Department of UCLA.

Performers
Ryan Miller – LA theater credits include Complete Works of Shakespeare Abridged (TTC), Romeo and Juliet (Coeurage Theatre), Last Train to Nibroc (ACTC), and See Rock City (LFT). He was in the world premiere of Development written by Warren Doody at Theatrikos Theater. Ryan is entering his third and final year of the MFA Acting program at UCLA where he was cast in Life on the Praca Roosevelt, A Midsummer Night’s Dream, and just finished shooting the television project Sanity. He is currently in rehearsal for Three Sisters at UCLA.

Maia Rychlik – Maia will receive her MFA from UCLA next summer (2017). Theatre credits include Three Sisters (Masha), Mid Summer Nights Dream (Hippolyta and Mustardseed),Life on the Praça Roosevelt (Concha). She has her BFA in Musical Theatre from Santa Fe University of Art and Design, credits including Spring Awakening (Ilse),Angels in America (Emily), Mr. Marmalade (Lucy), Little Shop of Horrors, and Scapin. Before her undergraduate studies, she grew up in Colorado where she was heavily involved in choir and different theatre projects around the Spring’s, including a touring children’s show, Jungal Book, as well as Cats (Jennyanydots),Appointment with Death (Sarah), The Little Mermaid (Ariel), Zombie Prom (Ms. Strict), and Seussical the Musical (Mayzie).