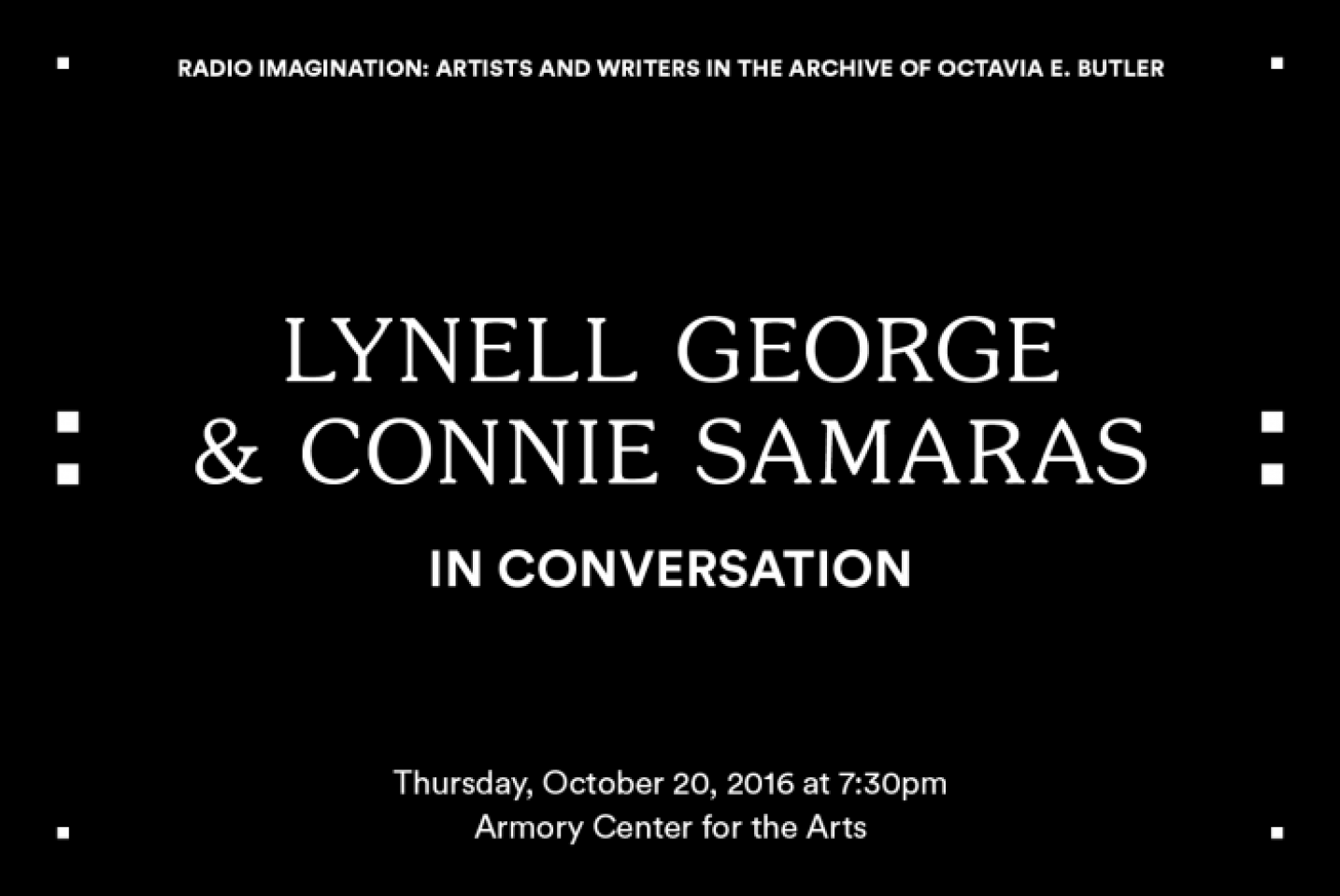 Armory Center for the Arts

In this gallery talk, writer Lynell George and artist Connie Samaras will discuss their research in the Octavia E. Butler papers at the Huntington Library.

George and Samaras were both commissioned to create new works of writing and photography, respectively, for Radio Imagination, Clockshop’s yearlong project exploring the life and legacy of Pasadena science fiction writer Octavia E. Butler.  New work from Connie Samaras will be on display in the Armory’s Caldwell gallery, and an excerpt of new writing from Lynell George will be read at the beginning of the event.

Lynell George is a Los Angeles-based journalist and essayist. As a staff writer at the Los Angeles Times and L.A. Weekly she covered social issues, art, human behavior, and identity politics. She is currently an arts and culture columnist for KCET’s Artbound. George’s writing has appeared in various magazines and news outlets, including Boom, Slake, Vibe, Washington Post, Boston Globe, Chicago Tribune, Essence, Black Clock, The Root, Ms., and many others, and she is the author of No Crystal Stair: African Americans in the City of Angels (Verso, 1992), a collection of essays drawn from her reporting. She is currently a Los Angeles Institute for the Humanities Fellow.

Connie Samaras is a Los Angeles-based artist working in photography and video.  Recent solo exhibitions include Last Contact, at De Soto Gallery in Los Angeles (2015) and the survey show Connie Samaras: Tales of Tomorrow at Armory Center for the Arts, Pasadena (2013). Recent group shows include Hanna Barsam Photography Invitational, Fresno Art Museum (2015); Hidden and Revealed, Angles Gallery, Los Angeles (2015); Dissident Futures, Yerba Buena Center for the Arts, San Francisco (2013-14);  and Free Enterprise: The Art of Citizen Space Exploration, California Museum of Photograph (2013). A monograph funded by the Warhol Foundation and distributed by DAP was published in tandem with Tales of Tomorrow. Samaras has received grants from Creative Capital, Anonymous Was A Woman, and the National Science Foundation.