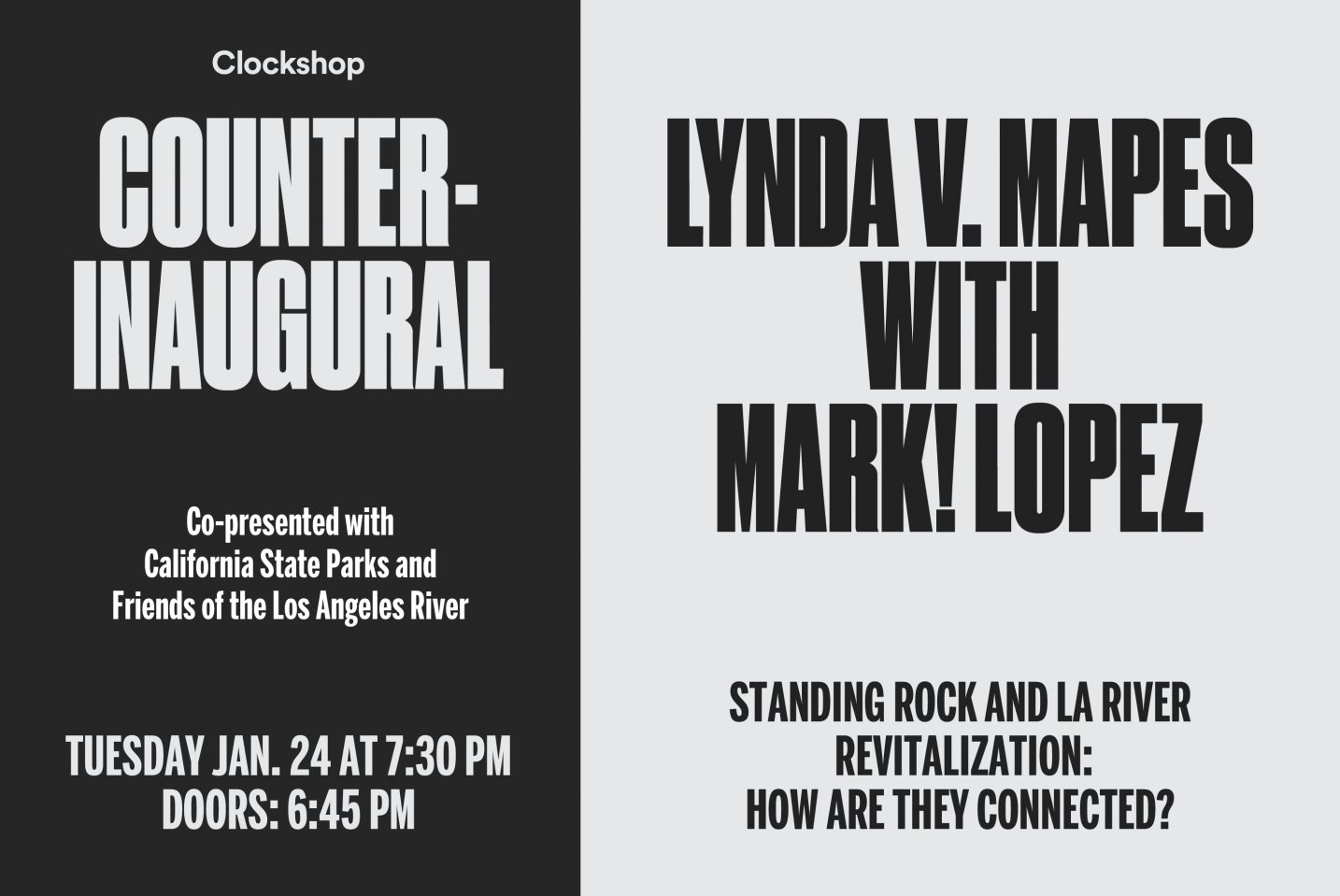 Lynda V. Mapes has been reporting on environmental issues for the Seattle Times since 1997 with a specific focus on river health and Native American communities.

These points of focus merged in her 2016 coverage of the Dakota Access Pipeline protests at Standing Rock. Mapes will be joined in conversation by mark! Lopez, Executive Director of East Yard Communities for Environmental Justice. Much of Lopez’s organizing takes place in communities adjacent to the southern portion of the Los Angeles River.  In this conversation, Mapes and Lopez will speak about what we’ve learned from Standing Rock, and how those lessons relate to LA River revitalization.  This event is co-presented with California State Parks and Friends of the Los Angeles River.

This event is part of Clockshop’s Counter-Inaugural, a series of talks addressing the misogyny, hate speech, and climate change denial that dominated the 2016 presidential campaign. It is co-presented with California State Parks and FoLAR.

Lynda V. Mapes is the lead environment reporter for the Seattle Times, where she specializes in covering nature, natural history, and Native American tribes. Her top stories recently have included her coverage at Standing Rock of Water Protectors and the Dakota Access Pipeline, and long term coverage of the largest dam removal ever in the world to restore the Elwha River and its salmon fisheries, critical to the native people for whom the river is named, the Lower Elwha Klallam Tribe. Lynda is also the author of four books, including Witness Tree which tells the story and science of climate change through the life of a single, 100-year old oak, due out from Bloomsbury Publishing in April, 2017. To learn more:

mark! Lopez comes from a family with a long history of activism. He was raised in the Madres del Este de Los Angeles Santa Isabel (Mothers of East LA Santa Isabel – MELASI), an organization co-founded by his grandparents, Juana Beatriz Gutierrez and Ricardo Gutierrez. This set his trajectory as a community activist. He has engaged in a wide array of student activism at UC Santa Cruz where he earned his B.A. in Environmental Studies, and taught university courses at UC Santa Cruz, Cal State Northridge, and UCLA Extension. He spent 4 years organizing with Communities for a Better Environment (CBE) in South East LA, where he was the Youth Program Coordinator. mark! earned his M.A. from the Chican@ Studies Department at Cal State Northridge, where he completed his Masters thesis titled The Fire: Decolonizing “Environmental Justice.” After serving as Lead Organizer for East Yard Communities and Co-Director with EYCEJ Co-Founder Angelo Logan, mark! is now the Executive Director. He organizes in the area where he was born, raised and continues to live.