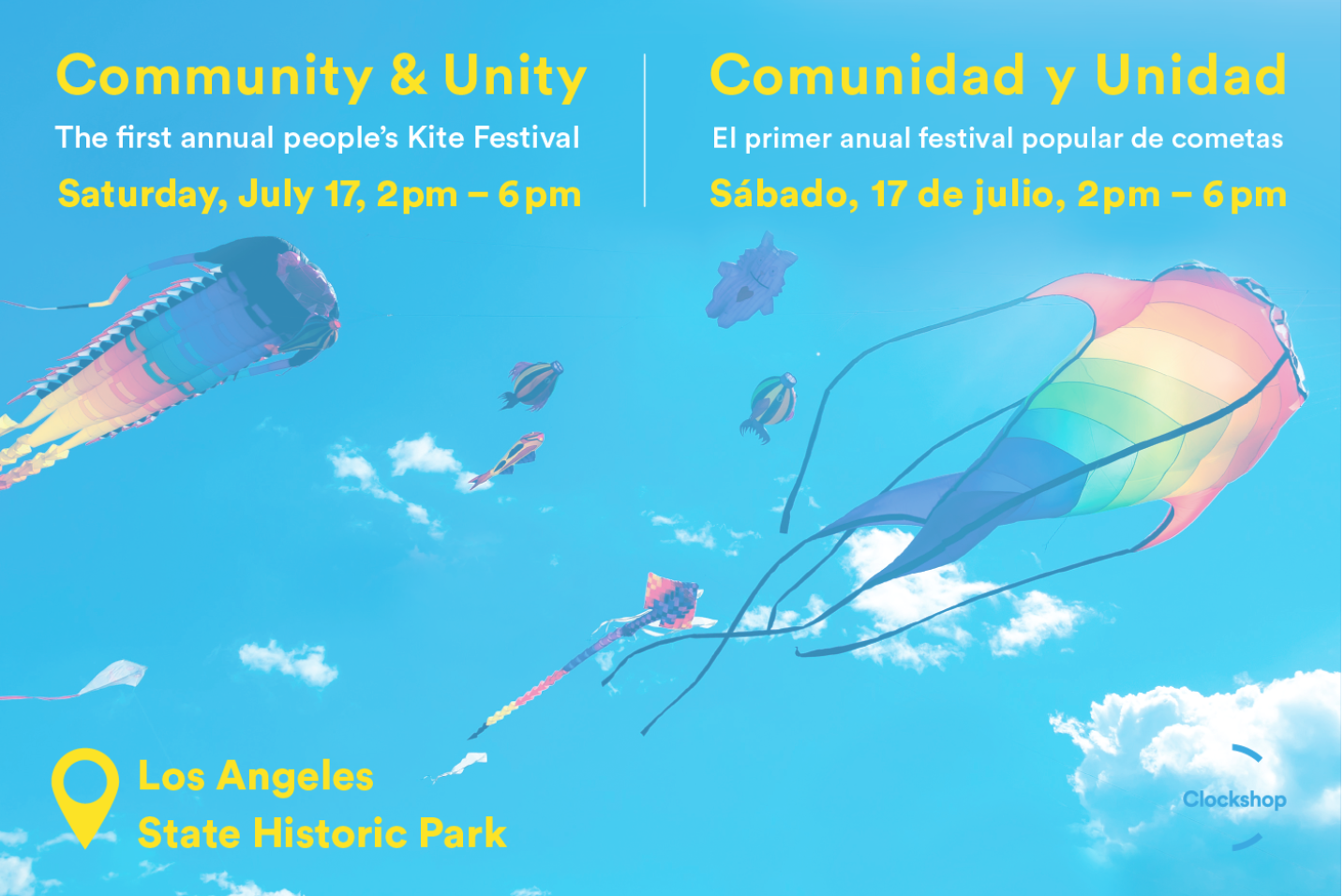 The event is free and open to the public. Optional donation with Eventbrite RSVP.

This fun and family-friendly festival will serve as an opportunity to bring together diverse communities in Los Angeles through the art of kite making and a day full of joy, culture, and uplift through the arts. It will feature a “gallery in the sky” flying demonstrations with kite masters, Ron Gibian, Scott Skinner, Joe Hadzicki; family art and printmaking workshops with Yuju Yeo and Dewey Tafoya, and musical performances with the Maqueos Band and Neon Dots (Andres Leñero).

This event will engage the whole family with children having an opportunity to fly their own kites, work on their own artful prints, and watch some wondrous kites take to the skies. The Bowtie design team will also be on-site at the event to get input from the public about the future State Park at the Bowtie.

Community & Unity Kite Festival is made possible by the support and sponsorship of CA State Parks.

RSVP (with optional donation) on Eventbrite. Clockshop runs on the generosity of our donors and funders. Community & Unity is a free community event. Any donations go to supporting the artists we work with, our staff and future programs. Thank you for your generous support.

Scott Skinner: A 1975 Graduate of the Air Force Academy, Scott turned to kites as complementary hobby to flying in the Air Force.  He collected and flew kites for several years and then began making his own.  He quickly hit on the idea of combining Japanese kite shapes and motifs with American geometric patchwork, leading to unique and exciting kites appreciated by both cultures.  He founded the Drachen Foundation, an educational non-profit that used kites to teach history, culture, art, and science.  Through the Foundation, Scott has led numerous kite workshops, published and contributed to books on the subject, and organized exhibits of kites from around the world.  He continues to make eye-catching contemporary creations as well as traditional Japanese models in bamboo and washi.

Ron Gibian has found inspiration for his kites and aerial sculptures in nature. Whether it be insects, birds or fish all have been sources of inspiration for his single surface kites as well as his more complicated three dimensional objects. “What I want to do in the sky is to create inspiring visual images” said Ron. “I want to inspire, excite, and provoke those who are looking at the works, to confront their own sensibilities so that they can see the sky and the world in a new more open way.”

Joe Hadzicki is a Mechanical engineer UC Santa Barbara and the inventor of the Revolution Kite. Having earned a bachelors degree in mechanical engineering at University of Calif, Santa Barbara, Joe has developed and filed patents on several products from kites to bikes to industrial machines for the golf industry. Creating a revolutionary kite design became his passion In 1987 which led to immediate recognition from the Kite Trade Association (KTAI) in 1988 with the Domina Jalbert award for Kite Innovation, as well as Best Manufacturer and Best New Kite awards in multiple succeeding years. While he has dedicated the majority of his time to engineering and and other projects, Joe was also a competitor in the late 80s and early 90s, going so far as to earn an AKA quad line championship title in 1990. A founding board member of the Drachen Foundation, Joe is not only an avid Revolution kite flier but also enjoys kite buggy, kite surfing, skateboarding and paragliding in his free time.

Kite Ambassador – Glen Rothstein: A serious kite flier since 1989, Glen Rothstein’s involvement has been neck deep in the vast world of kiting. Having the honor of being an American Kitefliers Association Regional Director for over 20 years, he has immersed himself in all aspects of his passion. With experiences ranging from working with the special needs community, curator of museum kite exhibits, multiple kite festival/event planning and master of ceremonies, to finding time when he can fly on his own, Glen connects those who are kite curious with an insider’s view of why he, and many others, enjoy what they do. If you find it hard to believe that he is, in fact, a serious kiteflier, ask to see the back of his belt.

Yuju Yeo is founder and creative director of All My Sisters, a design studio based in Los Angeles. She has over 15 years of professional experience to serve cultural, educational, art, and environmental organizations. As an artist and graphic designer, she immerses herself in and becomes an integral part of the communities she serves. She has a passion for bringing people of all cultures together to create. She strives to generate love, care, compassion and concern for each other, our earth, and everything upon and within it. She is committed to being a catalyst, sparking communities to celebrate self-expression through the creative process. Her work has been recognized by the AIGA 365 and AIGA Grown in California, by I.D. Magazine with an Honorable Mention in the Annual Design Review as well as Print Magazine, The New York Times, and California Design Biennial. Additionally, her work has been exhibited in various places including the Pasadena Museum of California Arts, Armory Center for the Arts, San Francisco, Pasadena and San Diego, as part of the AIGA show Grown in California, National Design Center, Architecture and Design Museum and Art Center College of Design.

Dewey Tafoya: Growing up in East Los Angeles, Dewey Tafoya is a self-taught artist and printmaker whose work is influenced by the urban landscapes, cultures and communities of the barrio. He has worked primarily in diverse and under-resourced communities to help provide access to art making as a healing process, as well as a mode of expression and community empowerment. His art deconstructs cultural and historical contexts to then reconstruct them to fit the views of the under-represented. As a teaching artist, he has shared his knowledge of screen printing and design with Los Angeles youth for over a decade. Specifically, he has helped youth to design t-shirts and prints through Self Help Graphics & Art’s Barrio Mobile Art Studio, as well as the SOY Artista youth program. He has also worked with continuation high school students and incarcerated youth through ArtworxLA, an arts-based organization that helps combat LA’s high school dropout crisis through long term sequential arts programming. Tafoya is currently the master printer at Self Help Graphics and Art.

Kites need music to dance in the sky. Grandparents and grandchildren from all over the world have flight kites together sharing wisdom and hopes. The music that we will share today is thought for the younger and older “kites” that will share their dreams of communion.

Maqueos Family Band, a traditional musicians’ family from Oaxaca. They brought their music and music-pedagogy to LA, and through their  playing and teaching they preserved in LA  banda music tradition from the Zapotec and Mixe Indigenous Peoples.

Neon Dots (Andres Leñero is an interdisciplinary artist and musician, he blends the traditional sounds of Mexico, with EDM music, creating a bridge for the ancestors to meet the young  souls.