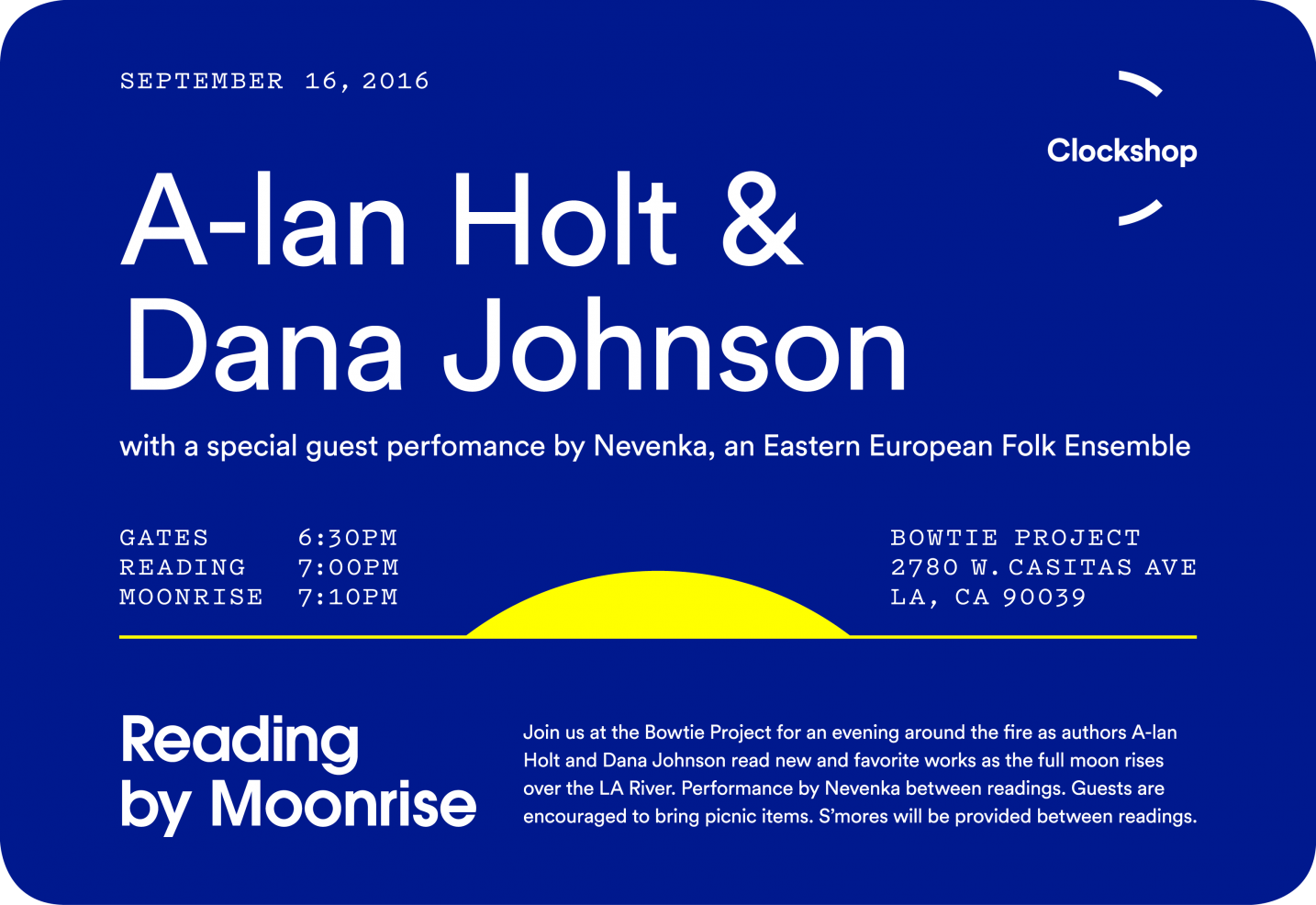 Join us at the Bowtie Project for an evening around the fire while authors A-lan Holt and Dana Johnson read new and favorite works as the full moon rises over the LA River.

This event will feature a special performance by Nevenka, an Eastern European folk ensemble.

Reading By Moonrise is a fireside reading series held at the Bowtie Project on the eve of the full moon.

A-lan Holt is a poet and playwright who imagines new worlds for intimate audiences. A former writer at the Public Theater in New York City, Holt’s newest play The Bottom of Heaven was developed starring Lupita Nyong’o and Tonya Pinkins. Holt currently serves as the Associate Director of the Institute for Diversity in the Arts (IDA) at Stanford University. At IDA she develops curriculum and experiences that explore the relationship between art practice, spiritual practice and social justice. This year, Holt will premiere two new works: Moonwork, a collection of poetry published by Candor Arts and Inamorata, a new film produced by TRUE MVMNT.

Dana Johnson is the author of the short story collection In the Not Quite Dark, recently released by Counterpoint Press. She is also the author of Break Any Woman Down, winner of the Flannery O’Connor Award for Short Fiction, and the novel Elsewhere, California. Both books were nominees for the Hurston/Wright Legacy Award. Her work has appeared in The Paris Review, Callaloo, The Iowa Review and Huizache, among others, and anthologized in Watchlist: 32 Stories by Persons of Interest, Shaking the Tree: A Collection of New Fiction and Memoir by Black Women, and California Uncovered: Stories for the 21st Century. Born and raised in and around Los Angeles, she is a professor of English at the University of Southern California.

Nevenka is a Los Angeles-based women’s folk chorus performing songs from Eastern Europe. Nevenka’s repertoire includes songs from Bulgaria, Macedonia, Croatia, Albania, Russia, Greece, and Georgia, as well as Ladino Sephardic and Rom (Gypsy) songs. The group was formed in 1976 by women who shared a common interest in the complex harmonies and compelling rhythms typical in Balkan music. Very much in the Eastern European tradition, Nevenka includes women of all ages making music together.